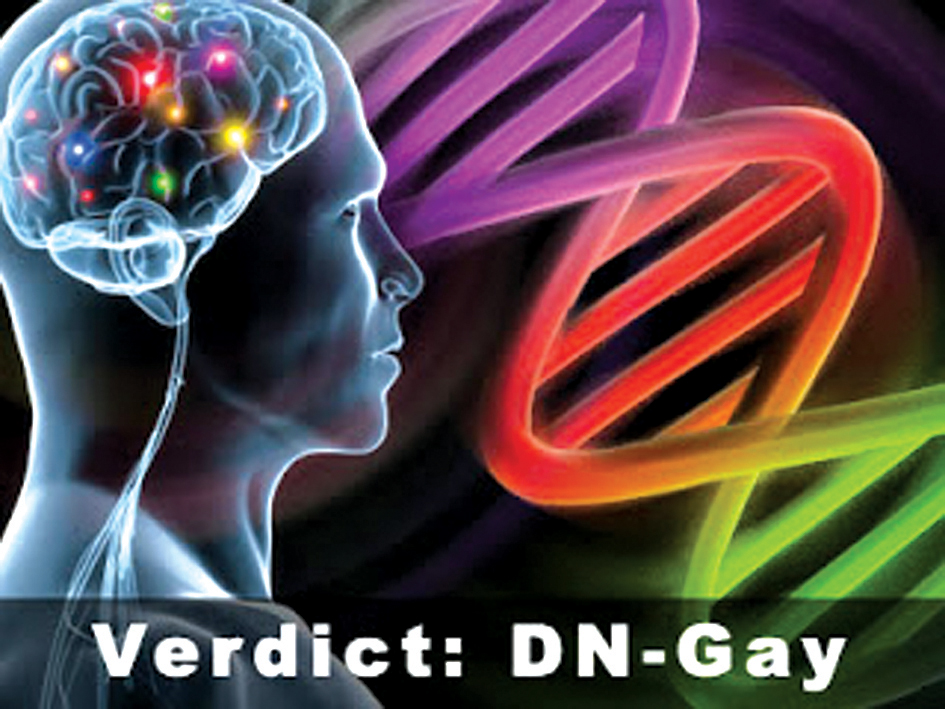 THE GAY GENE
By Alan S. Brown
Although some of this story is factual, it’s mostly b.s.

At a recent conference on Sexuality and Heredity, held in Intercourse, Pennsylvania, Harry Dick, Ph.d, presented his definitive, incontrovertible proof of the existence of a gay gene. Of course, it has been common knowledge that there were many gay jeans for numerous years: Levis, Calvin Klein and Ralph Laurens to name a few. But, I digress. Dr. Dick has provided authoritative proof that the gay gene does, indeed, exist. In his exhaustive study of four avowed, homosexual males, from Pattaya, in the Southeast Asian country of Thailand, Dr. Dick has identified the same anomaly in all four men. (Pattaya was chosen because of its typical, laid back, conservative ambiance and lifestyle.)

The quest for the ‘cause’ of homosexuality goes back to almost the beginning of time. However, in 1992, then U.S. Vice President Dan Quayle, recognized as one of the foremost intellectual thinkers of his time, said, homosexuality “is more of a choice than a biological situation…It is a wrong choice.” (Bear in mind that Quayle served under a president named Bush.) When I recently encountered Dan in a Bangkok bath house, I asked him if this latest research caused him to reconsider his stand on homosexuality. He said, “I can’t talk with my mouth full.”

According to an article in Time Magazine, two researchers from the US National Institutes of Health have documented same sex erotic behavior among male fruit flies and have isolated a gene in male fruit flies that produce this so-called homosexual activity. (I wonder if that’s why they’re called fruit flies.) Whether or not you can extrapolate oral sex among fruit flies to the existence of a human ‘gay’ gene, I’ll leave to those more qualified in these matters than myself. The point is that now that Dr. Dick has irrefutably proven the existence of a distinct gene present only in homosexual males, what are the implications?

Of course there are a lot of questions that still need to be addressed. For example, what about people who are in the closet even to themselves? Do they have this gay gene? Since they aren’t identified as gay, how do we know; and if they do have this gene, then is it exclusively a gay gene? For example, remember Larry Craig? He was the U.S. anti-gay rights Congressman, who was caught sticking his foot under the toilet stall at the airport, in an apparent signal to the next occupant that he was available. He eventually pleaded no contest to the charges brought against him. Does he possess the gay gene? He says he isn’t gay. We’ll probably never know. Also, if there’s a gay gene, does that mean there’s a straight gene? What about a lesbian gene; a transgender gene? It also turns out that there is a difference in the brains of gay men and lesbians, according to a study published in Science Magazine in 1991. A tiny region in the center of the brain was substantially smaller in gay men than straights. Of course, the only way to study this is through autopsies, so I don’t suggest anyone run and volunteer to be a participant. Maybe a section of gay men’s brains being smaller is compensated for by a bigger penis. Why hasn’t anyone studied penis size of gay men vs. straights? Huh? Perhaps, those guys who make me so jealous with their giant shlongs have really tiny brains.
If there’s an identifiable gay gene, what’s to be done about it? Does that validate what gays have been saying all along: that it’s not a choice to be gay? We’re born gay. Some ask why anyone would choose to be gay. I can come up with a few hundred reasons to be found in Boyz Town, Sunee Plaza and Jomtien Complex. In any case, if a gay gene exists, is it a mutation and, by inference, a disease or disorder? Or, is it merely a marker of a trait similar to genes for eye color and height? If the gay gene indicates a disorder, will millions of dollars be spent seeking a cure? Will pregnant parents seek genetic testing to determine the sexual orientation of their fetuses? Two prospective gay dads or moms could test to see if they will be blessed with a gay son or daughter. Some countries (Iran comes to mind) can eliminate all fetuses with this trait.

If someone possesses this so-called gay gene, can they seek a cure? Move over cancer, Parkinson’s, Huntington’s and even HIV, to name a few. When the right wing regains control over all three branches of the U.S. government, all federal research money will go to the elimination of the gay gene and the scourge of homosexuality.

If there really is a gay gene and a ‘cure’ is developed, will treatment be covered by Obamacare or Medicare? What if someone doesn’t possess the gay gene and feels that he’s missing out on all the fun? Will he be able to be treated for his ‘straight’ gene disorder? Most research identifies about 10% of the populations of various cultures throughout the world as homosexual; whether they’re from the most repressive antigay countries or more enlightened, liberal ones. It seems unlikely that sexual orientation is just a choice. Freud’s theories regarding the weak father and domineering mother as the cause have been largely debunked. I doubt that a gay gene will ever be definitively identified. And, that’s just fine with me.