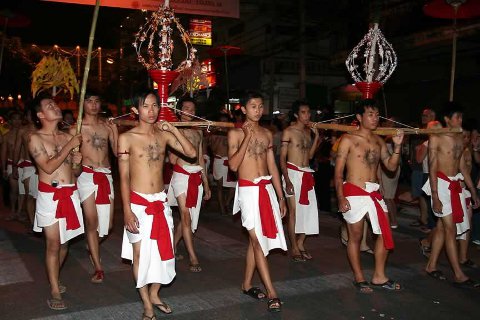 Writing the November issue of this column always gives me a good vibe.  After the months of intense summer heat followed by the interminable rainy season Chiang Mai slowly slides into cool season.  Four months of fabulous weather during which Northern Thailand is at its idyllic best.  In the city daytime temperatures settle around 25 degrees with cool evenings and sometimes chilly nights.  Clouds are rare and it seldom rains, though most winters do include a few short spells of rain to refresh the air.  Out in the countryside morning mists enhance the beauty of jungle clad valleys, whilst the tops of mountains can experience a little frost.

November sees the return of many winter birders significantly swelling the gay ex-pat population and, along with flocks of tourists and swarming digital nomads, the city becomes noticeably busier.  Those gay businesses that survived the low season become lively party venues with the influx of customers. One of the highlights of November is three day Loy Khratong festival at the full moon of the 12th month of the Thai lunar calendar.  Kratongs, small banana leaf floats holding candles and incense, are set adrift on rivers and waterways all over Thailand.  With the Kratong bad luck floats away.  The ritual also appeases the goddess of water.  It’s a beautiful sight to see hundreds of little lights drifting along the river.  Fireworks are also used in abundance during the celebrations and, In Chiang Mai, Kom Loy fire lanterns are launched everywhere.  Although in recent years the authorities have tried to restrict the practice.  Loy Khratong in Chiang Mai is also known by its Lanna name of Yi Peng and in 2018 takes place from 21-23 November.

Gay visitors to Chiang Mai during Loy Khratong should also check out the parades and beauty contests.  Various colleges and organisation carry their kratongs around Thapae gate and Thapare road, providing a veritable feast of handsome shirtless young men clad in traditional Lanna costumes.  A good place to experience Loy Khratong is Club One Seven (www.clubonesevenchiangmai.com), Chiang Mai’s premier gay sauna which has an ideal vantage point right on the banks of the Ping River a little south of the city centre.  Club One Seven is also a gay guest house and a great place to stay when visiting Chiang Mai.

For gay visitors, the nightife scene has two main components:  beer bars around the Night Bazaar area and “Gay Soi 6”, or a few male go-go bars situated in the cities northern suburb of Chang Puek.  There are also several gay massage shops around the city and two gay saunas.

In the Chang Klan area to the south of the Night Bazaar you can now find three gay massage shops.  His Club, once a well know massage shop in Chiang Mai close to Club One Seven, has re-opened after being closed for some time.  Maya massage (By the former owner of 69 Club and Bar 69) is off Chang Klan road near the Empress Hotel and a brand new massage called Apollo has opened on Rakang Rd.

The heart of gay social life for foreigners and ex-pats in Chiang Mai is Chareon Prather soi 6 at the night bazaar, known locally as Gay Soi 6.  At the bottom of the soi you will find Ram Bar with its ever popular Cabaret show, and adjacent to that is Secrets bar, Chiang Mai’s oldest gay bar which has a good crowd of visitors as well as a selection of young local hill tribe types who gather there to play pool.  At the other end of the soi Orion bar is another popular choice for pool players with a selection of Burmese and Laos boys available to entertain you.  There is also Jacky Bar, Pandee Bar and Chiang Mai 19 in the Night Bazaar building.

If you want a massage near the Night Bazaar Classic House, another long running and well run business is a good option, or you can try the New Diamond House.  Both are situated in back lanes between Kampang Din Road and Thapae Gate.

Foreigners visiting Chiang Mai often don’t realise few if any guys working in Go-Go bars, massage shops or beer bars are actually Thai.  Many are refugees from nearby Burma (Myanmar) as well as increasing numbers of Laos and Cambodian boys.   The majority come from the Shan state, the South Eastern part of Burma bordering Thailand, Laos and China.  Ethnically the Shan people are part of the Tai group which has origins spreading from Yunnan province in China.  They are also known as Tai Yai (Meaning Big Tai).  They Speak their own language, Shan, and have a rich culture which is quite different to Thai.  They seem more muscular, with harder more masculine facial features when compared with the softer, sometimes almost effeminate appearance of the classic Northern Thai male. Part of the Golden Triangle, the Shan state was for years under the control of Opium Drug Lords, such as Khun Sa, and remains one of the most lawless and dangerous parts of Burma far from Yangon (Rangoon) and Napyidaw (the new capital).  Government military forces have renewed clashes with the rebel Shan State Armies.  A common tactic has been to destroy whole Shan villages killing those who can’t flee, or detaining them as forced labour.  The result: a continual influx of Shan into Northern Thailand, with a steady migration to refugee camps along the border and then to Chiang Mai, the nearest urban centre, in search of work.

Their persecution doesn’t end here as they are tolerated but not welcomed or appreciated by the Thai authorities.  A source of cheap labour for Chiang Mai’s virulent construction industry, many are paid only 150 Bt  (less than $5) for a day’s hard labour.  No wonder scores of young Shan males try to make a living in Chiang Mai’s gay bars.  Sometimes just to pay dues to various Shan Mafiosi to remain in Thailand.  Few speak any English so it’s hard to ask those you meet in the bars about their backgrounds and personal stories, many of which are quite horrific.  Nevertheless, the Shan are some of the nicest people you will meet in Thailand. If you are in Chiang Mai in early December check out the Shan New Year festivities at Wat Ku Tao and Wat  Pa Pao.  The Shan new year is celebrated over several days around the new moon after Loy Khratong and the festival is a great opportunity to learn more about Shan Culture.  Note, this period is also not such a good time to visit bars looking for boys as they tend to be off celebrating.

Fo further news and information about gay Chiang Mai can always be found at  www.gayinchiangmai.com/News/