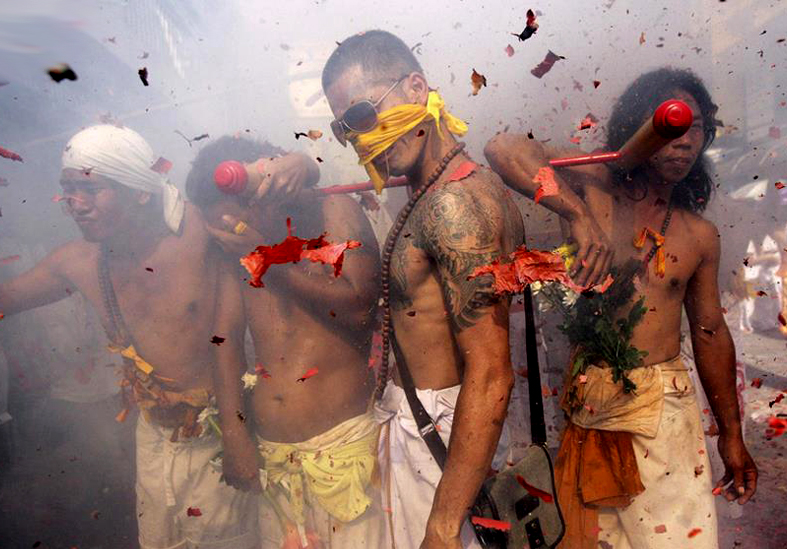 The Phuket Vegetarian Festival is a colourful event held from October 20 to 28, 2017, celebrating the Chinese community’s belief that abstinence from meat and various stimulants during the ninth lunar month of the Chinese calendar will help them obtain good health and peace of mind. Though the origins of the festival are unclear, it is commonly thought that the festival was bought to Phuket by a wandering Chinese opera group who fell ill with malaria while performing on the island. They decided to adhere to a strict vegetarian diet and pray to the Nine Emperor Gods to ensure purification of the mind and body. To everyone’s amazement the opera group made a complete recovery. The people celebrated by holding a festival that was meant to honour the gods as well as express the people’s happiness at surviving what was, in the 19th century, a fatal illness. Subsequently the festival has grown and developed into a spectacular yearly event that is attended by thousands with participants flying in from China and other Asian destinations. What is the Vegetarian Festival all About?

The Ceremonies
One of the most exciting aspects of the festival are the various, (and sometimes gruesome) ceremonies which are held to invoke the gods. Firewalking, body piercing and other acts of self mortification undertaken by participants acting as mediums of the gods, have become more spectacular and daring as each year goes by. Men and women puncture their cheeks with various items including knives, skewers and other household items. It is believed that the Chinese gods will protect such persons from harm, and little blood or scarring results from such mutilation acts. This is definitely not recommended for the faint hearted to witness. In 2011, some 74 people were injured with one death reported. Injuries are usually sustained from the indiscriminate use of firecrackers so beware of this pitfall and stay well away from this deafening and sometimes frightening aspect of the Vegetarian Festival.

The ceremonies of the festival take place in the vicinity of the six Chinese temples scattered throughout Phuket. The main temple is Jui Tui Shrine not far from the Fresh Market in Phuket Town. The first event is the raising of the Lantern Pole, an act that notifies the nine Chinese gods that the festival is about to begin. The pole is at least ten metres tall and once erected, celebrants believe that the Hindu god, Shiva, descends bringing spiritual power to the event. For the next few days, the local Chinese/Thai community brings their household gods to the temple, along with offerings of food and drink. It is assumed that the household gods will benefit from an annual injection of spiritual energy that fills the temple. Visitors can observe and even participate in the lighting of joss sticks and candles that are placed around the various gods. Usually street processions take place, where visitors can see participants walking in a trance. Other events include hundreds of local residents running across a bed of burning coals, or climbing an eight metre ladder of sharp blades while in trance. Apart from the visual spectacle of this festival, visitors can partake in specially prepared vegetarian cuisine made available at street stalls and markets around the island during this time. The vegetarian dishes are not easily distinguished from regular dishes – soybean and protein substitute products are used to replace meat in standard Thai fare and look and taste uncannily like meat. Look for the yellow flags with red Chinese or Thai characters to find vegetarian food stalls – and keep your camera handy!! For more information on dates and events, please visit: www.phuketvegetarian.com.

s in Phuket Town
There are more than 40 Chinese shrines scattered around the island. Many of them are just small buildings but all participate in the festival. Visitors who want to experience the most of this event should visit the major shrines including the five oldest shrines in Phuket; Put Jaw, Jui Tui, Bang Niew, Cherng Talay, and Kathu Shrine. Alternatively, see the list below.

The Commitments
The festival always falls on the first days of the ninth Chinese lunar month, and for nine days participants observe the following commitments: